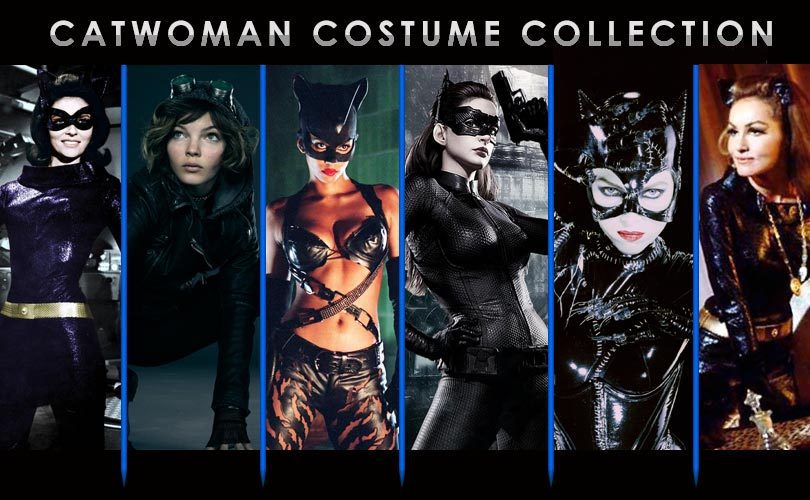 When we speak about Selina Kyle aka Catwoman, the first thing that will pop up in people’s minds is that she is the love interest of Batman. While some diehard comic book fans will disagree to it and instead will call her his enemy. The truth is… both the assumptions are accurate. However, she has been turned heel and good from time to time. In the modern era, she has been displayed to be a helpful source to the Dark Knight. Therefore, for now, we can say that she is on the good side.

Catwoman has been portrayed in movies as well as in TV series. Out of the many actresses who have put on the spandex suit and acted as the version of criminal feline, only a handful of fans were successful. Moreover, their suits have been featured below in our guide. Let us have a look at those amazing attires of all time. 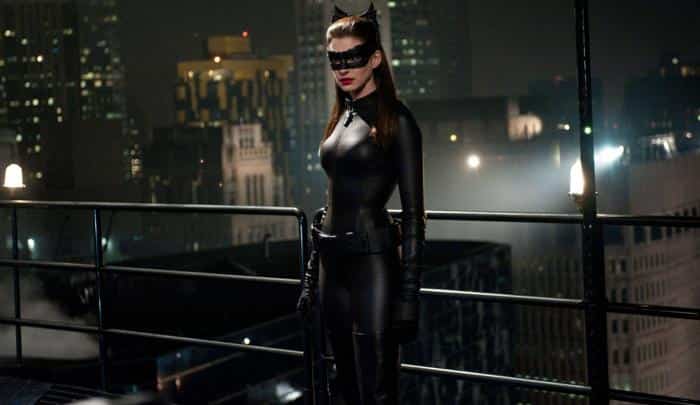 First up, is Anne Hathaway from Dark Knight Rises. She played a big role in helping Batman bring down the villain who nearly put an end to his job, Bane. Her outfit is somewhat simple but very famous. She perfectly played the character and her sexy attire was another attractive fact from the film. She defied the odds with her performance and now you can do the same by going as Selina Kyle from Dark Knight Rises. This is what you will need. 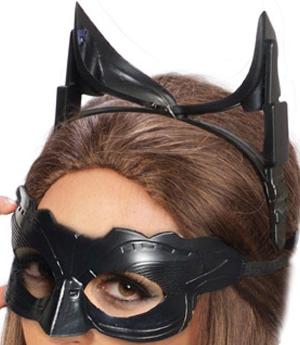 Starting with the mask, many people adopt her style for fancy parties and Halloween cosplay costume events. This Cat woman mask is the main thing to give shine to any personality having it or wearing it. It’s made of Vinyl material and is very comfortable to wear.

Next is the complete body suit of Catwoman Costume introduced by Anne Hathaway in The Dark Knight Rises. The suit is made of 85% Polyester, 9% Spandex and 6% Vinyl that makes it a superior wear. It’s comfortable to move around wearing this outfit. You will get everything with this suit except few things like gun and whip of Pilfering pussy n that is mentioned below. 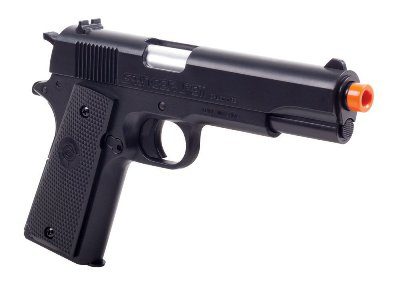 This pistol is exactly designed in the way like Catwoman used in The Dark Knight Rises movie. However, it’s not real but it gives you 12-shot magazine with power upto 325 FPS. The pistol is very light weight with string power and it’s enough to scare someone. 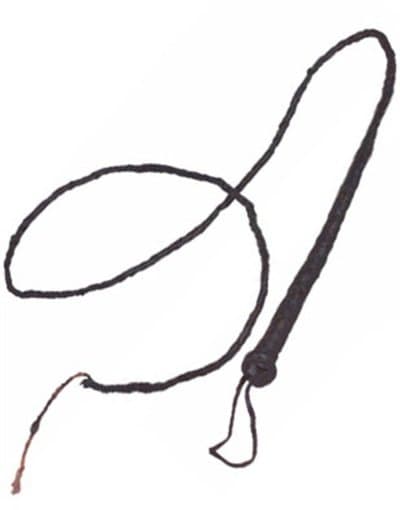 This is the weapon that she always use to keep with her. This Catwoman Whip is almost 6ft long and made of high-quality material. It’s flexible and light weighted that makes it easy enough to hold.

That was the Dark Knight Rises attire belonged to Anne Hathaway. It is a very popular choice to bring out your slim physique. If you are confident enough to show yourself in a body-hugging suit then this dress is perfect. We will now move our attention to its incarnation in the TV series. 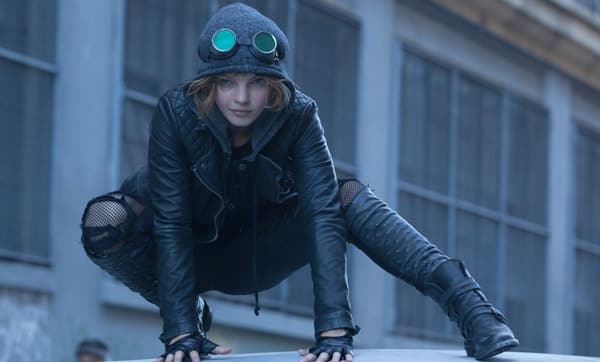 If you have been watching Gotham, then you must have come across Camren Bicondova. She plays a younger version of Selina Kyle in the series, a series that has no Batman. Camren is still in her teenage years and has already displayed her acting potential. She also plays a positive role. Her outfit, however, is quite different and represents a sort of undercover look. Check it out. 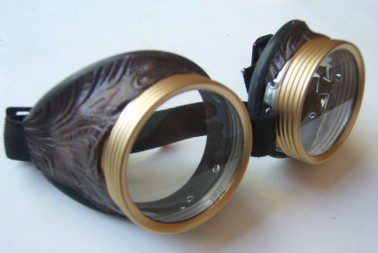 Camren has attired a fully different style of Catwoman and these glasses can explain everything. She’s not wearing a complete leather suit in the Gotham TV series, she has attired these glasses except the Mask. This makes her different from all the others. This Goggle is made of faux leather that will not hurt you around the eyes while wearing it. Lenses are made of high quality and are available at Amazon. 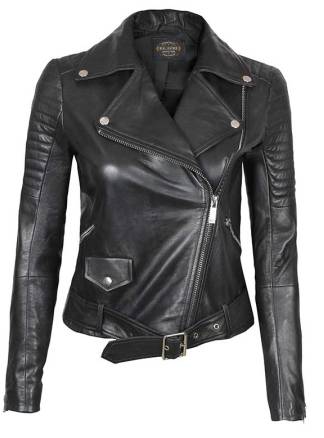 As mentioned above, she’s not wearing a complete leather suit but she attired this outstanding Jacket with her attire. This jacket is available at Fjackets in real leather and in full exact biker style like Camren Bicondova wore in the series. 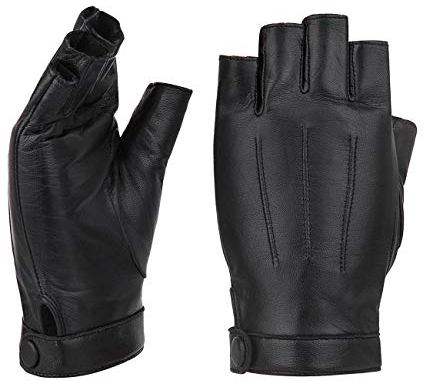 Stunning style of biker gloves that she wore in the series. The pattern designing on the gloves give it an extra attraction in look and style. It’s made of leather and is comfortable. 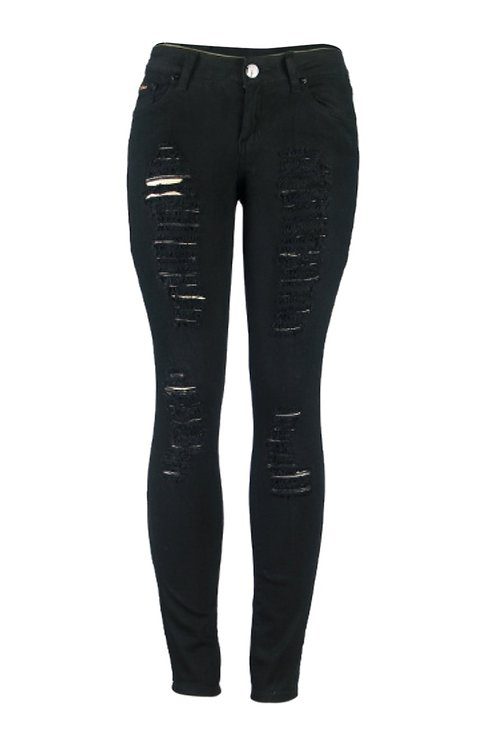 This is the exact same jeans that Camren Bicondova wore in the series. This amazing pattern and skinny design of this jeans make it durable wear for casual and for cosplay. 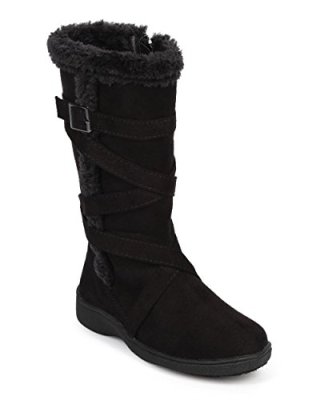 Last but not least, here her Sexy Catwoman costume gets completed. She attired this pair of shoes with her outfit that has straps on it, comfortable enough to get wear as costume and high-quality material making it long-lasting stuff.

A very stylish don’t you think? This is what you expect when you have a fashion-oriented superhero. Nevertheless, wearing the Gotham costume can surprise many people, as it is very rare. You can be the first one to wear this updated dress and set a trend for others next year. We have reached to our next actress as Selina Kyle and she’s tagged to be one of the best actresses to play superheroine. 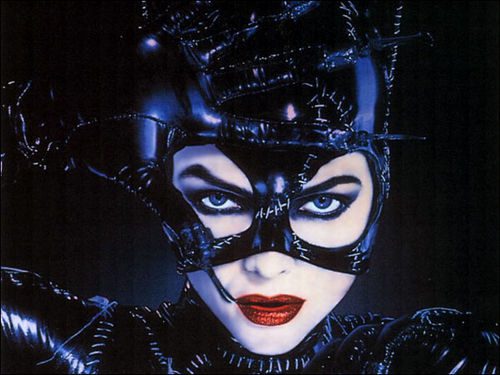 She is none other than Michelle Pfeiffer. She acted in the second Batman movie titled, Batman, Returns. In this movie, fans got to see the bad side of Cat as she became a continuous obstacle in Batman’s way to defeat the Penguin. Nonetheless, when it comes to her attire, she has quite a unique look. Check it out below. 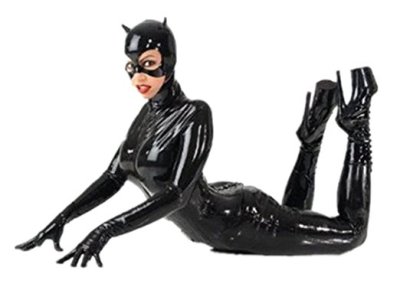 This is the most attractive and different costume of Catwoman which is portrayed by Michelle Pfeiffer. This particular attire has white detailed lining all over the suit. This Catsuit is available at Amazon with all the exact patches and style. You will get the complete suit of Michelle Pfeiffer outfit of Batman returns including, mask and shoes. 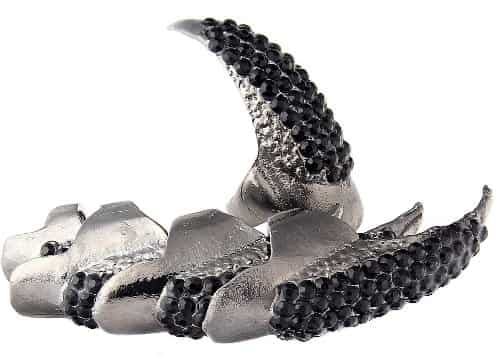 Next comes the nails of a kitten of doom. These are the ring claws that make it easier to take off and on. It also makes it safe for your hands and nails. The claws are made of alloy material with fake black diamond studs on it. This is perfect wear with the Catwoman costume ideas. 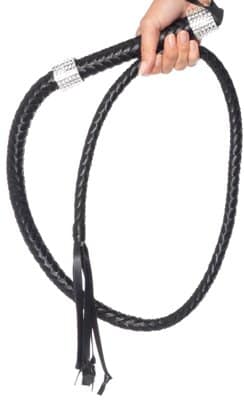 Like I said earlier, She does use the whip as her weapon and Michelle Pfeiffer used this whip as her weapon in Batman returns. It is made of 50% Polyester and 50% Polyurethane making it a lightweight prop to have with the attire.

Michelle Pfeiffer has maintained her style and introduced a truly different outfit than all other. Well, she’s not the last one on our list so let’s jump to the fourth outfit on our list. 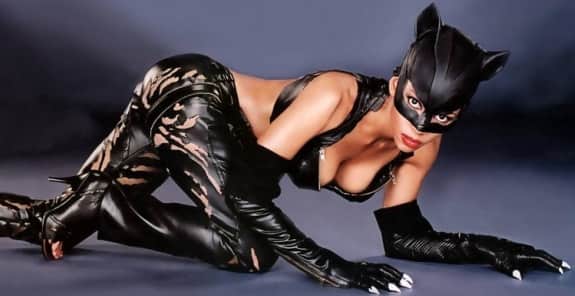 Halle Berry has portrayed the character in the 2004 Catwoman movie. She has described the all-new look by attiring the sexiest suit of Batman sidekick ever. She has great working experience as a superhero and is the best choice for the role. Following is the guide that will make you look like her. 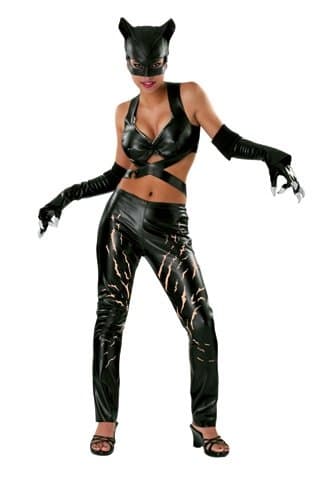 This is the sexiest costume of Catwoman that is introduced by Halle Berry. This is a classic but very famous version of DIY Catwoman costume. Vinyl is used in making of this jumpsuit. It’s is a light-weighted and attractive to wear in parties. It includes the bodysuit, mask, and gloves of Halle Berry costume. You can get this easily from Amazon.

In the movie, Halle Berry used this whip with her sexy looking attire as her weapon. It’s a light weighted whip with high-quality material that is very flexible and shiny. 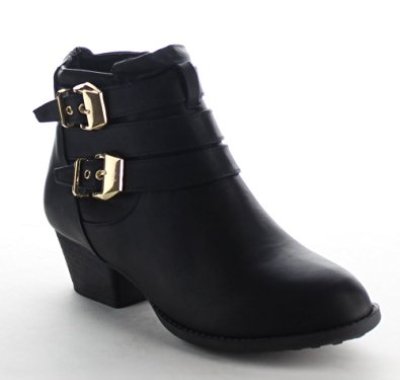 This is identically the same shoes that she attired with her suit in the movie. This high heel shoe looks fantastic with the sexy Halle Berry dress and you can easily get this from Amazon.

The fourth pilfering pussy outfit is complete here with the sexy look of Halle Berry. Still, there are two more outfits to come. 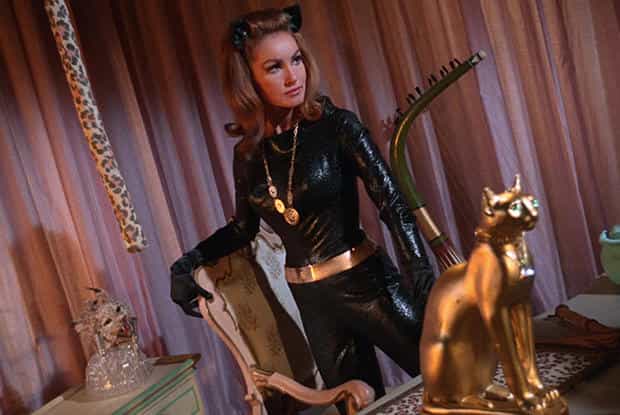 A vintage style of Catwoman costume that is introduced by Julie Newmar in the Batman TV series of 1960. She is also known as the sexiest girl to portray Catwoman. Her outfit was so simple but still, cosplayer follows her style in attire parties and other events.

This is the 1960’s classic costume of Catwoman that is introduced by Julie Newmar in the TV series of Batman. This dress is still very much famous and loved by many followers. 100% Polyester is used in making of the suit. This dress from Amazon includes gloves with nails, belt, ears, eye mask, and necklace. All these gadgets will surely make you look stunning.

You can simply get all the stuff of Julie’s Pilfering attire at one place. Now, there is just one more to go. 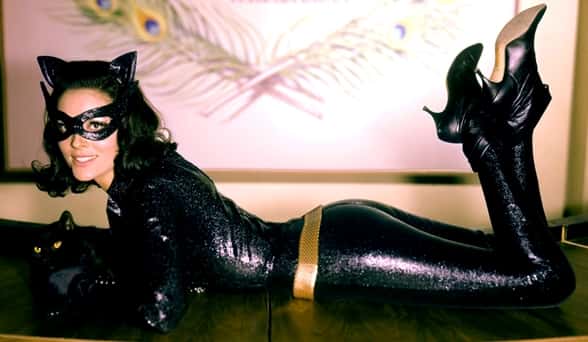 Lee Meriwether also got the chance to wear the Catwoman DIY costume and portray it being the sidekick of Batman. She has played the role in 1966 Batman movie and her dress and famously known as the classic one.it is much similar to the suit of Julie Newmar but it has its own personality. You can check the guide below.

Here is the last but not the least costume of Catwoman that is introduced by Lee Meriwether in Batman 1966. This outfit is much similar to the dress of Julie including jewelry, and details. The Necklace is included in this suit that is an extra piece for you if you are going for Lee Meriwether cosplay. You can get this from Amazon.

Here our guide ends but there is one more thing that can be worn with the attire and will make you look attractive. 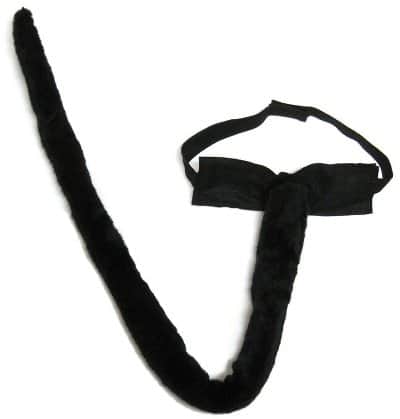 This is the tail that cosplayers usually wear with their cosplay. This can be combined with any Catwoman sexy costume and will definitely look fantastic with it.

And with that, we come to an end to the Catwoman costumes collection. These are the three most demanded, and up to date costumes that you can wear this year. Follow this convenient guide and have the cosplay of one of the hottest characters in DC.