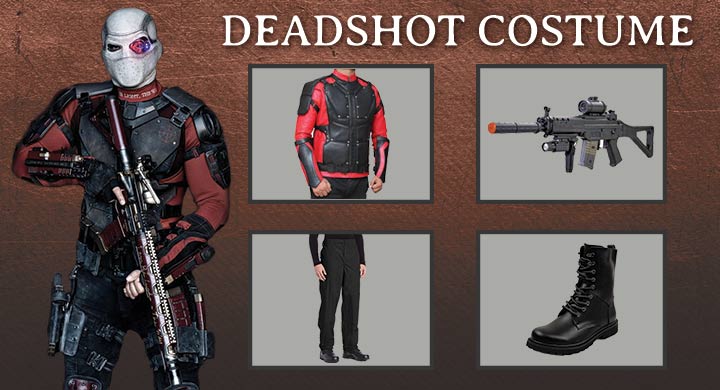 Just as his name suggests, Deadshot is without a doubt one the best marksman in the market. Starting out as a supervillain, he made his way into the antihero category as time progressed. He will appear in Suicide Squad, which is a movie to be released this year. You can find more Suicide Squad costume jackets from FJacket. Deadshot is extraordinarily accurate with his trusty firearm. He has never missed the target he wants to hit; he even boasts about this himself. All but one time when he tried to hit Batman. What we are doing here is that we are making an entire Deadshot costume guide for his fans who are out there.

He has hit some pretty jaw-dropping shots since his first appearance. He is also a phenomenal fighter, i.e. a hand-to-hand combatant, as he has fought against the likes of Joker and Batman. Not only are his abilities extravagant but so are his looks. He has the flawless appearance of an assassin which no one can argue against and which sane person would not want to be like him? Now you can quite easily do that by just following this guide and buying the items that we have enlisted, and you will be the world’s finest assassin in no time! 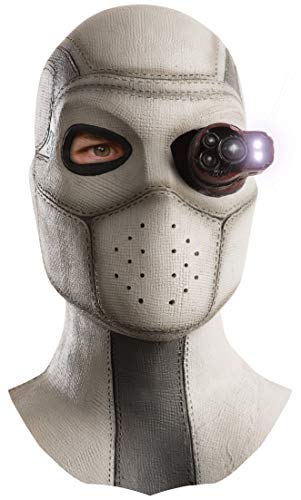 Orlando Furioso, also called Floyd Lawton, wears a mask while conducting his assassination and other missions. Our long rambling of its significance can be found in our great Katana Costume Guide. The inception of Deadshot in his left eye. This one is made from semi-rigid rubber and is handmade to give it the utmost brilliance. 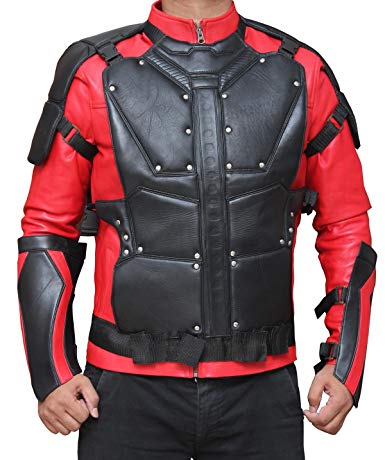 The upper wear of this baddie is loaded with protection. However, in the Deadshot costume you won’t need all that; what you will need is a good looking, and matching jacket with sound quality just like this El Diablo Blue Letterman Jacket. Everything up to a small line detailing of the jacket has been matched. Internally, Viscose Lining gives you all the comfort in the world. The jacket also has other smaller but important details such as having four pockets, having an erect collar like Deadshot’s, having a zip closure, etc. 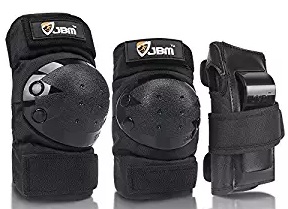 Floyd Lawton wears protective gear which protects him from many things ranging from gunshots to melee attacks. We found just the thing for you guys as well. Feast your eyes on the fantastic red and black combination protective gear, which has the same brilliance as this red and black Suicide Squad Letterman Jacket. Although it has a different primary purpose, it will also well serve the aim of being used in the Deadshot costume as well. 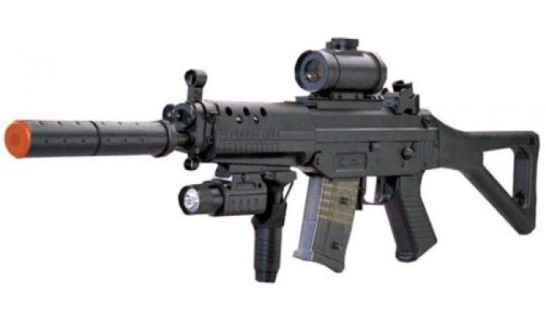 This is no ordinary firearm. Although you would want a rifle that just has the looks of the one which he uses, here we bring you one which not only can be employed in the Deadshot costume but also as an airsoft gun. The price in which it is coming in is, beyond a doubt, reasonable; very much like the way this Harley Quinn Jacket is. It has the full sound, feels, weight, and features of a real rifle. It comes with dozens of accessories like a silencer, laser aiming module, instruction manual, speedloader, flashlight, etc. Lastly, the rifle is crazy durable! It will undeniably last you a very long time.

Your trusted pistol belt is what keeps the firearm holstered while you use your fists to pound your enemies. If it weren’t for this belt, just think about what would have the Man Who Never Misses done with the firearm that he has. It is used more to give you a similar appearance of Orlando Furioso than to be properly used as a holster for the rifle. However, you can use this belt for other purposes after you are done with the Deadshot costume. 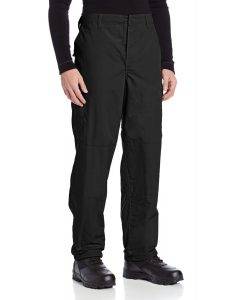 It is a regular black pant. However, these pants are not that much expensive, and they will make an excellent addition to your closet which is why I have included them here; it is an item just like this Adewale Akinnuoye Agbaje Black Jacket. It also has many different pockets which you can utilize in any way you like. This pant is necessary to complete the Deadshot costume. 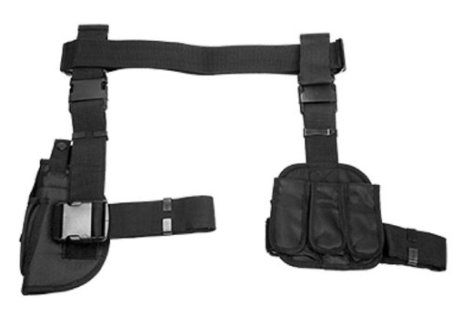 A leg gun holster is an item that you did not know that you needed. As an accessory it is exactly like this Pyramid Studded HQ Belt; both of these feel as if they are not required for the costumes but still, without them, the costumes are incomplete. It is perfect for situations such as when you are crouching, and you don’t have easy access to your waist belt; this is where this holster comes in. The accessory can also be used in many other costumes after it has been utilized in this one like in Tomb Raider’s, Black Canary’s, etc. for female and for the male it can be used in Deadpool’s, Captain America’s, etc. Other than these ones this item can be utilized as a regular holster as well just like the waist one, so it is surely worth the purchase. 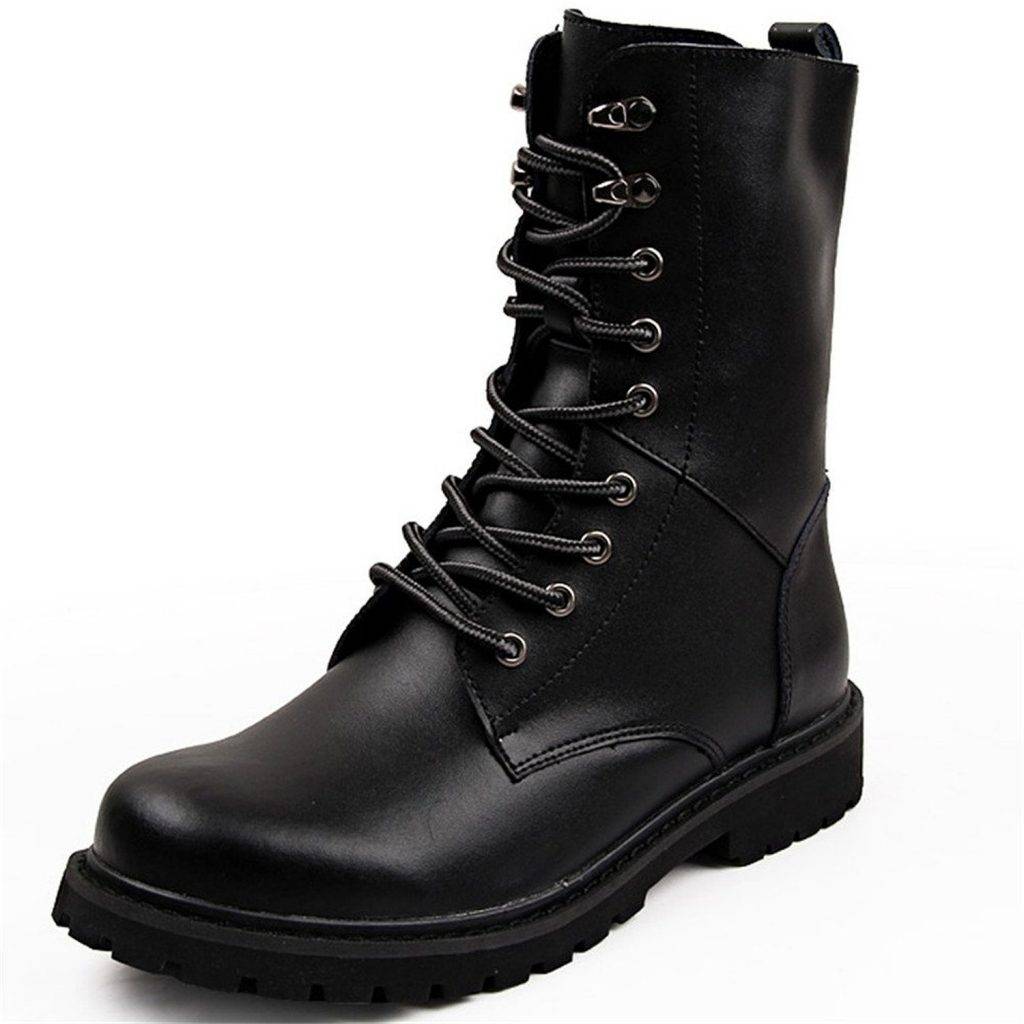 These exquisite boots are awesome with 8″ inches high and black in color. It looks like original Deadshot Boots and necessary to complete the complete the costume set.

And with that last product, we say adios as our comprehensive guide comes to an end. Now, if you are not that much of a fan of Worlds Finest Assassin and want to look at other costumes that might look better on you then have a look at this blog of 600+ Halloween Costume Ideas where you will surely find one for yourself. However, if you are more of a Suicide Squad fan then do not fret as we have you guys covered as well with this complete Suicide Squad Costume Guide. Share this blog to your friends who want to buy Deadshot costume.