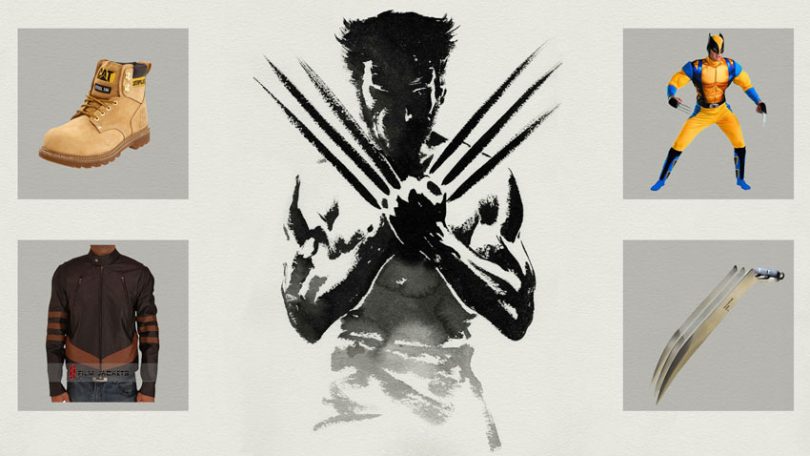 Superheroes are known for wearing capes, mask and boots One thing may be that how you can make your Wolverine costume DIY with the help of Wolverine boots, shirt, etc.  Two popular wolverine clothes have kept people engaged over many years. One is the yellow and black attire from the comics, and the other is of our favorite Hugh Jackman.

HOW MANY WOLVERINE CHARACTER WE SEEN SO FAR! 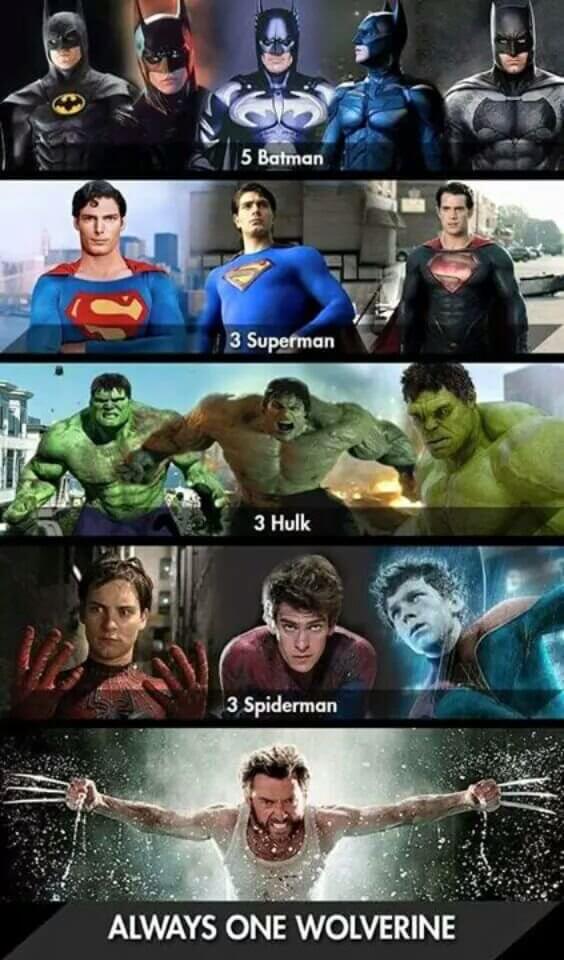 He’s not like other hero’s who are continuously replaced by someone else. Just look at batman, superman spiderman and other characters, all got tired of playing the same role except this wild beast. Hugh has portrayed the character for 17 years, no other character has played a comic character for so long in the movies. He just can’t enough of slaughtering his enemies. But now, he has finally decided to hang his boots. In the Logan movie, Jackman played as Wolverine for the last time and it was a very emotional role for him. So this is your final chance to dress up in the wolverine Halloween costume, and here is what you will need to do.

Let’s Start with The Final Chapter 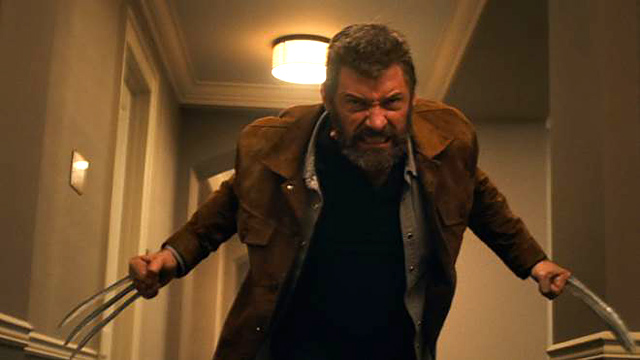 This last solo movie is totally epic. We thought he might play low due to his old figure, but he proved us wrong. He retained the same feeling of action, and he was way brutal than before and given all he got to make the best “farewell” movie ever. Apart from the F word he used at the last moment, the intensity was totally extreme. So now you can push that limit beyond by dressing up as your favorite old hero from the movie. Here are the required Wolverine Costume items from Logan movie. 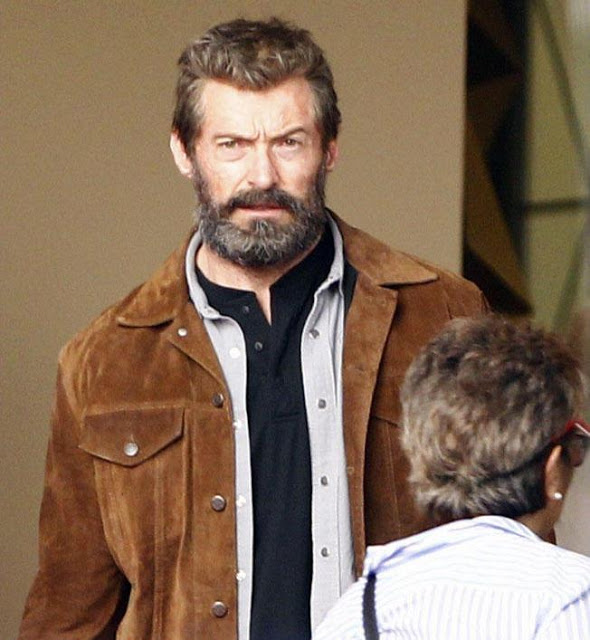 He has finally brought something new for the fan. This theme jacket will most likely give you a traditional western look and not to mention how much of a bad-ass you’ll look.  The guy was very emotional while playing the role, he wanted to left something out for the fan that’ll he’ll be remembered for. In addition to previous Wolverine costume, this one should be your first pick. 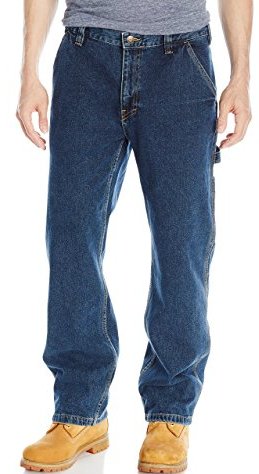 How can you portray like him without wearing his style jeans? Featured Denim wolverine pants will go extremely well with above brown jacket. Cool casual wear for everyday use, Show em who’s boss! 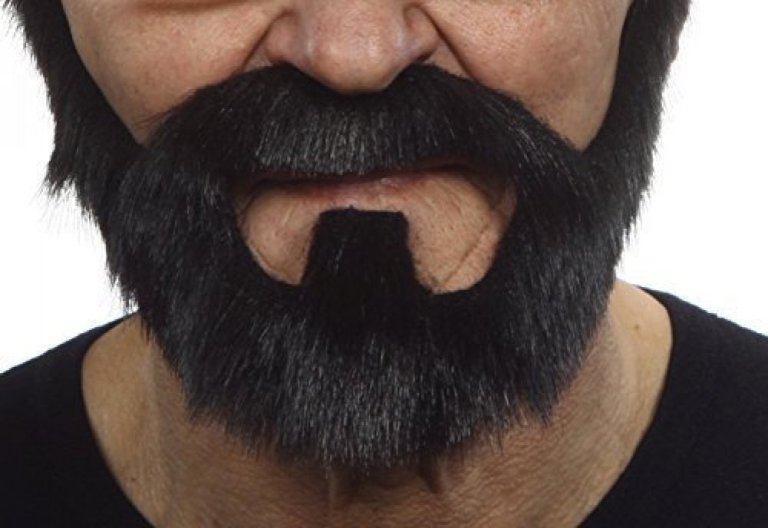 If you can’t grow a decent beard like Hugh Jackman than your only option is to patch a fake beard to your face. Don’t worry, people won’t notice it as long as your dressed up as Wolverine and the best thing, this can be held for longer period.  Don’t buy it if you already have similar style facial hair. 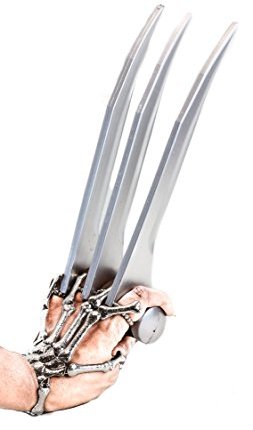 You can’t be an extreme and brutal beast without making someone fear you. You just got to show how much of savage you can be by wearing this Logan extreme style Claw that’ll look good when dress up in Logan Wolverine Costume. 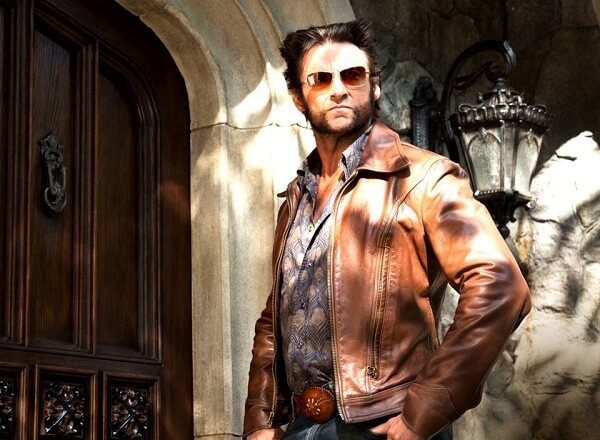 Moving towards Hugh Jackman previous attire. They are more famous than the one in the comics and cartoons. And it is really strange that an outfit from the comic and cartoon is beaten by an attire from the movies. This is because Hugh Jackman played the character so that the writers decided to keep this version of Wolverine in mind. Over the years we have seen five Batman, three Spiderman, three Superman, but only one Wolverine. Don’t go for words, try them out. Here are wolverine cosplay costume items Jackman worn during his role as Wolverine. 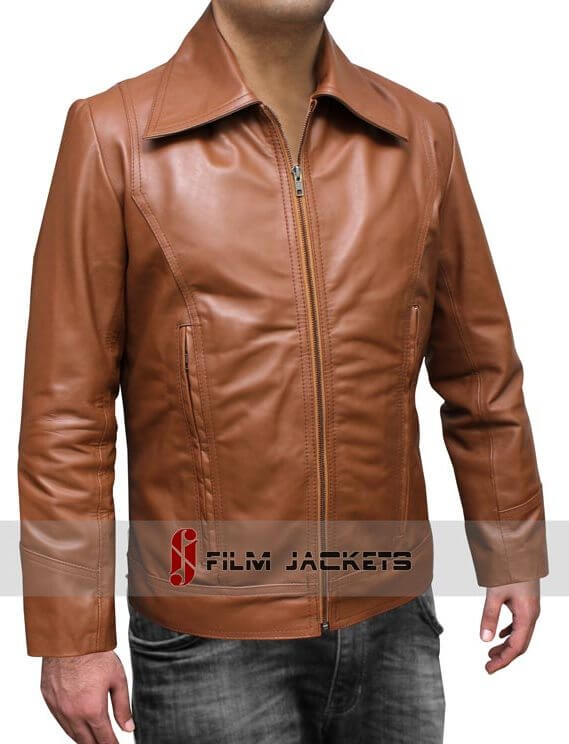 To look like a mutant, you got to dress like one. With this featured Wolverine Leather Jacket, you can own the same look. The inner features are comfy and no matter how long you wear it, you won’t get outgrow of it. The famous movie inspired jacket now available at best selling rates. 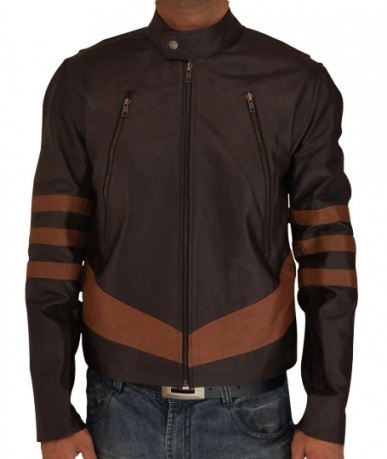 The first part of your Wolverine costume is this jacket that will be the center point of your attire. We haven’t seen Logan wearing many clothes, but there is one thing that he definitely wears and that is this jacket. This iconic jacket is fashioned out by us with pure perfection and attention to all the tiny details. The jacket is made of synthetic leather and gives out the same impression as the original one. Inside of the jacket is polyester lining which provides comforts and aids in soaking sweat. 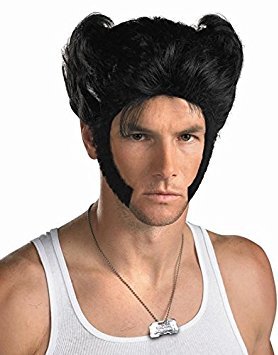 Why would you pay makeup artist for the hairstyle when you can easily buy this wig and look just like the character himself! Best fitting wig which is washable but doesn’t use plastic comb it’ll make it messy rather use a metal comb. 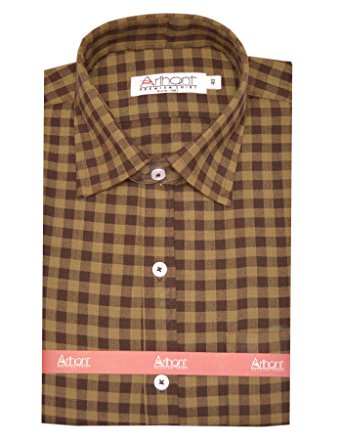 This conventional checkered shirt perfectly defines the lumberjack personality of Hugh Jackman. This shirt is a near match of the one we saw in the movies. A shirt is made up of cotton making it very comfortable to wear. The checkered design is the one that never goes it out of style and owning one will be a definite improvement of your wardrobe. 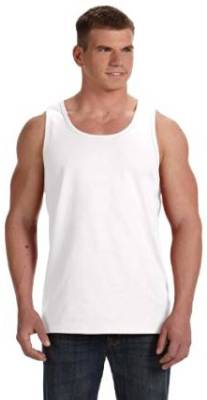 Now, I know most of you were confused you read the shirt, thinking that Logan never wears a shirt. He does actually, but its buttons are always open, so tank top is more visible than the shirt. The iconic Logan tank top is featured here, and I don’t need to tell you that you have to add this in your Wolverine cosplay. 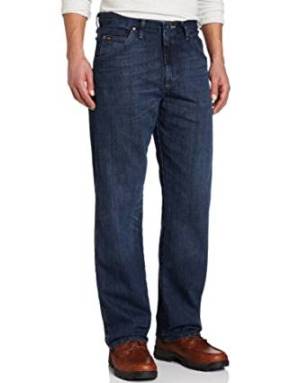 The rough, tough Logan wouldn’t be so tough without these stud denim pants. These pants are made to look hard but in reality, are made up of cotton. This means these pants are very comfortable to wear around. The relaxed fit and the five pocket design makes these pants a perfect for daily casual wear. We request you to add these pants not only to your cosplay but also to your daily wearables. 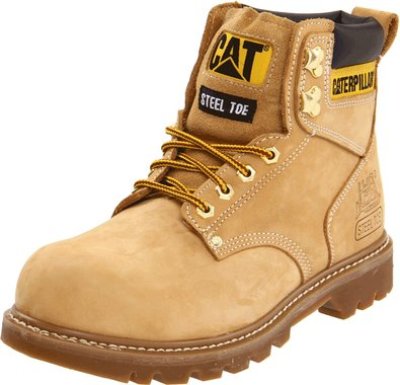 These boots are made of leather with rubber sole. These are finest quality shoes you find, and they look exactly like the one Wolverine wears. These shoes are oil resistant which means dust will not get stuck on it. The stylish color and sturdy design is sure to make you fall for it, don’t hesitate to listen to your heart and buy them now. 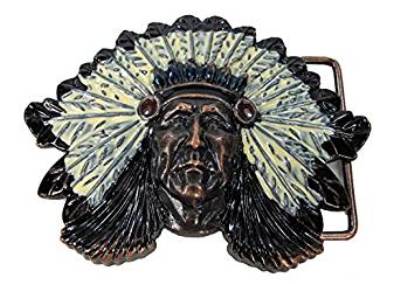 I know you can’t smoke a real cigar but dressing up like Logan means you got to adapt his favorite hobbies. He likes smoking cigars so you got to pull one out of the pocket too but don’t kill yourself just for the guy, try out this fake puff cigar when you dressed up as Wolverine.

It is evident that you can’t have a belt buckle without a belt. Here is one that will match your character’s persona and attire. The belt is made up of full grain cowhide leather which is very durable. It has got snaps to change buckles so that you can wear it with many different buckles. 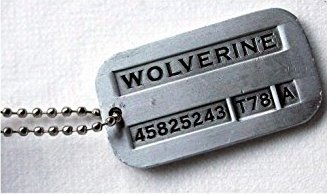 Another details worth emptying your money for. The Dog tag pendant was given to Logan because he was a subject of study for the military and it was his identification kind of thing. This along with the unbreakable steel and unshakable memories are the only things that connect him to his past. Adding this detail to your Wolverine costume will assure your place among the best cosplayers of the Halloween season. 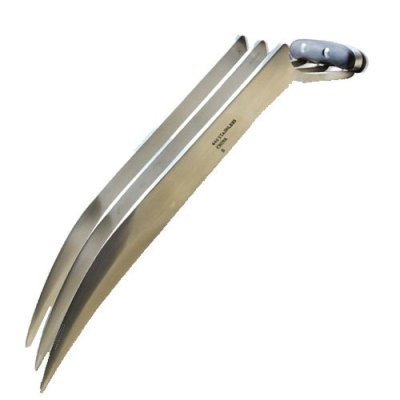 No there is no need to add wolverine claws to your costume. It is not necessary, not at all. You have got everything there. You have good wolverine boots, pants, shirts, the Jacket, the pendant, and buckle too. Why would you need this? No matter what I say, you will buy this for yourself. So without further do bring these home now start the countdown to Halloween. 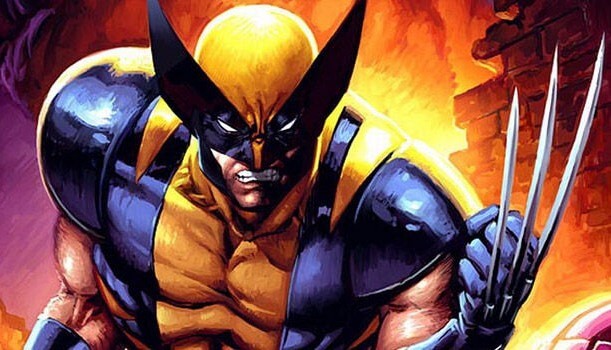 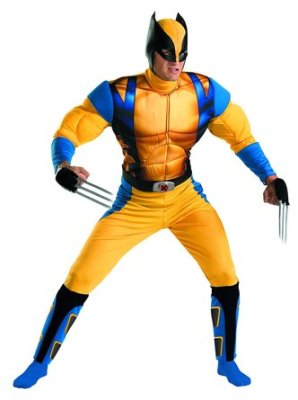 So the next up is the comic books outfit of Wolverine. Fun fact we were going to see this suit on the big screen worn by none other than Hugh Jackman. But that scene was deleted from the movie for unknown reasons. The comic book attire is a mixture of yellow and black and comes with a mask. Here is one for adults made up of polyester for perfect fit and comfort. The package includes the jumpsuit with muscle on arms and torso. Also replica claws and mask. If you are a huge comic fan, then this costume will be best for you. Not only in comics but this suit is also featured in some loved cartoons and video games.

You can also have your children share your passion with you. Kids will like this vibrant colored suit, and they will love the claws of Wolverine. The Wolverine claws for kids, mask and the belt buckle all are part of the jumpsuit. Give this perfect Halloween treat to your little monster.

Women too can choose to be like their hero in this sexy costume dress that comes with boots, gloves, and small claws. It’ll make you look sexier and best to wear on Halloween season. 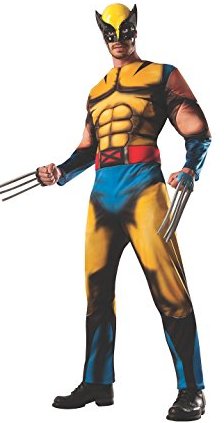 Wear this classic style wolverine costume to look more like a fictional character in any cosplay occasion. This is an official marvel’s merchandise designs exclusive for movie fans. Even if you’re skinny from the inside, it’ll make you look stronger from outside.

Your kid is going to love this classic costume for Halloween. Not only he’ll look fictional in it but scary too. 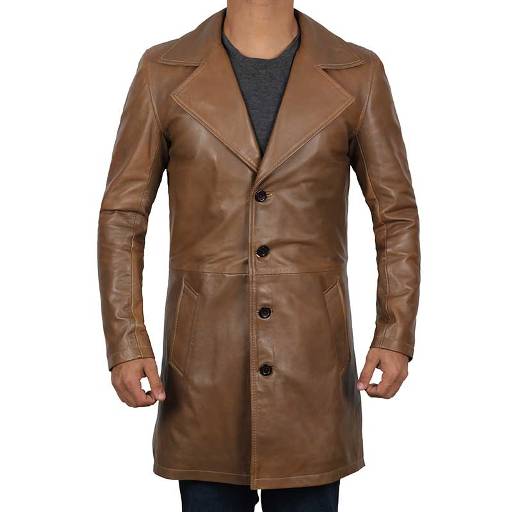 This synthetic leather coat is inspired by Wolverine Logan. This is something that you need to own if you’re a die-hard fan of Hugh Jackman and his movies. In harsh weather, your body won’t feel cold or lose your style. 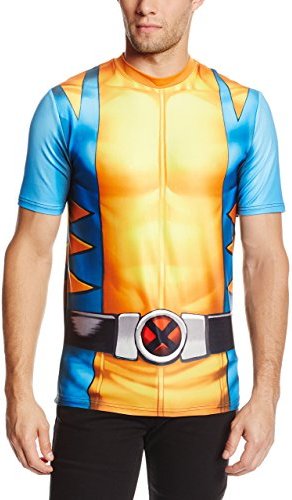 For everyday wear, this 3D print design shirt is the best pick to look like Classic Wolverine.  It’ll look trendy on both Casual and Halloween, now all you need is gloves, mask, and claws to butcher some enemies.

This wolverine movie costume comes with everything you need to replicate the cinematic version of the wolverine. For athletic build body, it’s a unique choice.

Inspired movie fashion has become a trendy choice for men. It’s not just any jacket based on film but rather character’s own signature style jacket that Jackman wore during his role in the world’s longest-running movie franchise. 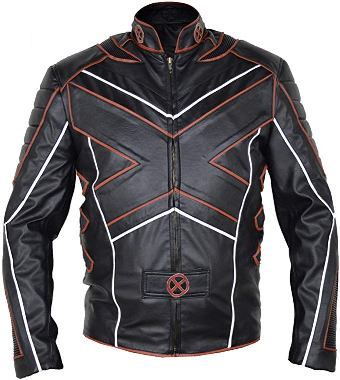 Create a Bad-ass Look in featured Jacket designed for true bikers. Not just a stylish jacket but a personal item every man should own. A cool wolverine outfit for men.

So this is our complete guide for the Wolverine costume. We have added both the attires from comic books and movies. But we are sure that ninety-nine percent of you will choose the Hugh Jackman outfit as it is more popular. Apart from being popular, it is easy to make and is so trendy that one can wear it on any day of the week. Still, you don’t have to put too much load on your mind, it’s not a hard choice between the favorite costumes of the year. Tell us which character you impersonated and how much praise you got from it. You can also share your pictures with us, and we will make sure to add them to our blog.